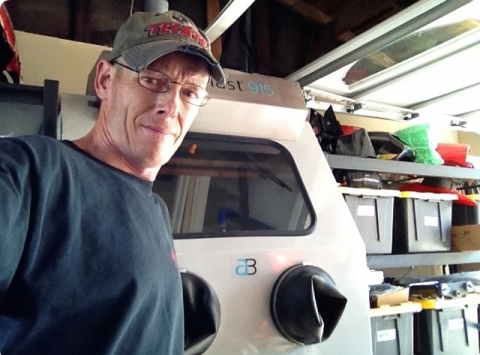 Johnnie Moule, sole owner of MVF, has always had a passion for 80s – 90s sports bikes, having grown up a few miles from where West Coast Imports & Fastline - Preston now operates their business importing rare Japanese sport bikes and providing a great source of recycled/ refinished parts. From reading an article on Vixen’s UK website, on reviving a Kawasaki GPZ carburetor, Johnnie realised that he had to try vapour blasting for himself, seeing how old cast and machined parts could be restored to as ‘as-new’ condition.

Johnnie initially contacted Debbie, Vixen’s export sales personnel, to establish if there was anyone in Southern California who was using Vixen’s wetblasting machines. This initial enquiry resulted in Johnnie investing in an Aquablast 915 wet blasting machine and the filter box to allow a closed loop operation and remove the risk of ground contamination, so important in Eco-conscious California.

Manually operated, the Aquablast 915 machine is particularly effective for creating a satin finish on stainless steel along with a wide range of other metals. The Aquablast range is designed to simultaneously blast and degrease components in a quick and easy dust-free process, which achieves outstanding finishing results on a variety of components.

The key to Vixen’s wetblasting process is that the finish is produced through flow of water borne abrasive and not by media impact. This helps to create a finer finish due to the lubrication and flushing action of the water during the process. Vixen’s wet blasting process eliminates media impregnation into the component, and as a result, is vastly becoming a popular choice for companies worldwide.

“Back in the UK, after I finished school, I restored my mum’s old 1955 scooter, but there was only the traditional dry blasting companies to call upon at that time. I was a little disappointed by the finish and the parts looked like they had obviously been blasted and the exterior panels required a lot of work before paint to get a good surface finish.

For now, I mainly use the Aquablast for my own bike parts as I work full time in the Aerospace industry. Once I become a little more skilled with the Aquablast I’m considering opening up my services to a wider online internet market in California, as I currently have a few friends and associates who need Jaguar and RZ Yamaha parts refurbished. Eventually I want to expand my customer base to local bike and car restoration dealerships. Maybe then Web-based business.

I currently blast bike engines and suspension parts which fit perfectly into the Aquablast 915. The beauty of this process is they come out looking like they’ve just been cast or milled from the factory. I am looking to try some cast 17” wheels as my technique improves before stove enameling or using a local powder coat.

Debbie was lovely to work with and most of the time I’d shoot off an email but as I needed to get the order placed before the end of the year, I called Vixen just before they shut down for the Christmas holidays. Everything was resolved before the festivities started and the 915 arrived without hassle a few weeks later.”